Music for Winds...but not for "Band"

I've been giving some thought lately to those lovely pieces of music that are often played by high-level college and professional wind ensembles that are written for winds...but were not specifically written for band. In most cases, this means orchestral winds (i.e., no saxes and no euphoniums), but this is not always so. 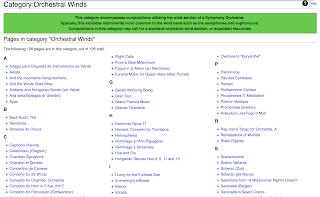 I'm not thinking about works that are written for chamber winds or Harmonie, as there is a huge body of literature that concerns those types of works, but rather music written for a large ensemble of orchestral winds. Three works immediately jump to mind because -while written for orchestral winds- they are most frequently performed by wind bands: Joseph Schwantner's "...and the mountains rising nowhere", "From a Dark Millennium", and "In evening's stillness..."(His other original works for winds, "Recoil," and "Luminosity" include parts for saxophones and euphoniums).

A few other works that are often played by wind bands (though not technically written for band) include:

Then there are some works that don't seem to be performed by bands very often, but are tackled by the wind sections of symphony orchestras from time to time, such as:

What say you? What else is out there that is of interest to you, written for winds though not specifically for band?